An elderly cat has been reunited with her owner, thanks to a Cats Protection branch in Scotland and a little help from Facebook.


Little Size, a 23-year-old tabby-and-white cat, was found in the middle of a park during a heavy rainstorm, in some distress. She was handed in to CP’s Arbroath & Carnoustie Adoption Centre who took her into their care.

Centre Co-ordinator Sharyn Wood said: “We felt sure her owner must be looking for her, so I put a story on my own and the branch’s Facebook page, asking everyone to share. Over the next few days there was huge activity on the site which, at its peak, numbered 5,835 shares with 269 people talking.”

All this publicity led to two positive identifications, as a pair of Facebook users recognised Little Size as the playground puss of their school days. The cat belonged to Mr and Mrs Adam of Friockheim, near Arbroath; Mr Adam had worked as a caretaker at a primary school and the cat had been a regular feature around the grounds, making firm friends among the pupils.

“She is now back home enjoying the comforts of her sunny seat in the conservatory,” added Sharyn.
Posted by Meow Blog at 11:47 3 comments: 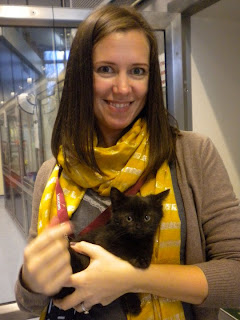 Although we helped to neuter more than 190,000 cats in 2011, a visit to any CP site across the country in the height of kitten season will demonstrate the scale of over population in the UK. I appreciate how easy it is to be seduced by the charm of a kitten, but for me, the influx of them brings home the importance of neutering. These kittens will prevent some of the adult cats in our care from finding a home and it remains the fact that there are too many cats for too few homes.

Because of this, we recommend that pet cats and kittens are neutered at four months of age or earlier. Many kittens in CP care are neutered a couple of days after their first vaccination at nine weeks, if deemed suitable by a vet. I have witnessed the neutering of nine-week-old kittens at the clinic at the National Cat Adoption Centre and it is amazing to watch their quick recovery. You can see for yourself by watching this video that we have filmed of the procedure. Don’t worry; it’s not graphic so is safe to watch over lunch!

It is known that over 90 per cent of female cats in the UK do end up being neutered at some point in their lives, but many only do so after having one or more litters of kittens, at which point the damage has been done. Six months was traditionally advocated as an age to neuter, but this is too late for some cats which will have already reached puberty. By neutering at or before four months, the risk of accidental pregnancies and unwanted litters is removed.

As part of our continual endeavour to get many more cats neutered before they reach puberty, we have set up an Early Neutering Register. This list of veterinary practices that will neuter kittens before six months of age appears on our website, with 900 practices signed up in the first year alone. However, we would love to increase this number to give everyone the option of taking their kitten to a vet to be neutered at four months or younger. 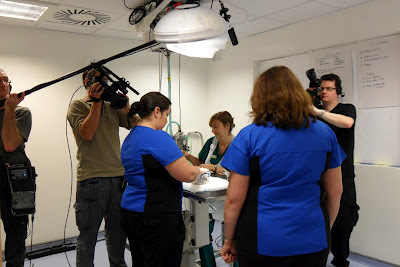 Earlier neutering is practised widely in other countries but some vets in the UK have concerns. However, many studies have shown that there is no evidence that neutering earlier than six months – and as early as seven weeks – has developmental or behavioural consequences. In addition, the perceived increased risks of surgery/anaesthesia are now considerably reduced by published information on improved techniques and agents.

What you can do to help
Please ask your vet if they are listed on the CP Early Neutering Register and, if not, ask them if they would consider changing their age of neutering for kittens

Find out if they have had a chance to watch our Guide to Pre Pubertal Neutering a DVD that was sent out free of charge to more than 4,000 veterinary practices last month. If they would like a copy, or if they would like further information, please ask them to contact us.

Cats Protection is at the forefront of feline welfare and we hope that you can help us to reduce the problem of overpopulation by supporting the earlier neutering of cats and by understanding the positive effect that this could have on the cat population as a whole.
Posted by Meow Blog at 10:16 10 comments: