A Cats Protection branch in Surrey wants to find an owner for a particularly noisy cat.

Pretty 16-year-old Sandy has louder calls than most cats because she is deaf.
“Sandy’s miaows have been compared to a baby crying,” says Jacky Eyres, Branch Co-ordinator of CP’s Caterham, Redhill & East Surrey Branch. “Sandy is otherwise healthy, and she’s a friendly cat. There’s a home out there for her somewhere.”

The ginger cat has been with a branch fosterer since December 2012 but hasn’t yet found the permanent home she needs.
﻿
﻿Jacky thinks the cat would be best suited to a hearing-impaired owner who would not be disturbed by Sandy’s clamorous early-morning calls. The charity Action on Hearing Loss has publicised Sandy's plight to its members in the hope that one of them will fall for her charms.

The ideal new owner would not have immediate neighbours, young children or other pets. While Sandy can go outside, she would need to be supervised or have an enclosed garden so she doesn’t stray too far.
Sandy is calmer, and miaows less frequently, when she has plenty of attention, so she’d need an owner who’s at home for at least part of the day.

Could you provide Sandy with the special, permanent home she needs? Or do you know someone who could? Contact the branch on 07868 597359 or email eastsurreycats@yahoo.co.uk. And find out more about adopting a CP cat here http://www.cats.org.uk/adopt-a-cat

Email ThisBlogThis!Share to TwitterShare to FacebookShare to Pinterest
Labels: looking for a home

Veterinary staff at Cats Protection’s National Cat Adoption Centre have saved the lives of a pregnant cat and her four kittens after she had difficulties giving birth. 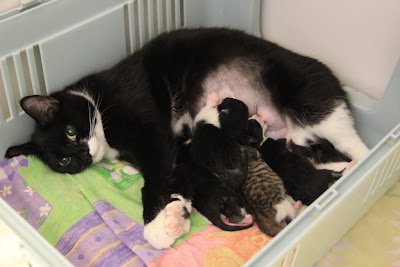 The team at CP’s centre in Chelwood Gate, East Sussex, performed an emergency Caesarian section on black-and-white Lexi on 13 March after she developed complications during labour.

Nathalie Dowgray, Veterinary Officer at the centre, said: “Cats tend to be quite independent so when Lexi went into labour we let her get on with it but closely monitored to check everything was okay. It quickly became apparent something wasn’t right and the kittens had become stuck.

“In that situation, you are really talking about minutes to get the kittens out safe and well. Fortunately, we have a terrific and very dedicated team who stayed on after hours to help with the operation. We were able to deliver all four healthy kittens.”

Lexi and her kittens recovered well from the operation and are currently being cared for at the centre.

The kittens – two females and two males – have been named Nat (tabby) and Vicky, Dominic and Dale (all black and white) after some members of the vet team and their partners!

The National Cat Adoption Centre has set up a fundraising appeal to care for Lexi’s kittens and other unwanted kittens this year. To help, please visit www.justgiving.com/NCAC-LEXI

Lexi’s dramatic operation marks the start of kitten season, and the centre expects to be dealing with an influx of unwanted kittens in the coming months. Cats Protection recommends that all cats are neutered from four months old and we may be able to help those on low incomes with the cost of neutering. For more information, click here http://www.cats.org.uk/what-we-do/neutering/

If you live reasonably near to the National Cat Adoption Centre and would like to find out more about adopting Lexi or her kittens, please call the centre on 01825 741 330.
Posted by Meow Blog at 10:02 4 comments:

Three years ago, tabby Toby was an unloved, injured stray forced to scavenge for scraps just to survive.

One day, he appeared in the garden of Dawn Bayliss, who lives near Polbathic, Cornwall.

“We saw him limping very badly down the drive,” says Dawn. “The children were beside themselves because he was obviously in pain. His ear was torn and very bloodied.”

Dawn’s family left out food for their unexpected feline guest, but couldn’t get anywhere near him.

So Dawn turned to Cats Protection’s Torpoint & Rame Peninsula Branch for help. Before long, with advice from Branch Co-ordinator Margaret Connolly, the family had managed to catch Toby in a humane trap.

The tabby-and-white cat was taken to the vet for treatment for his ear and paw. The vet told Dawn that Toby’s paw had been injured in the past and had rehealed in an awkward position – Toby would need ongoing treatment. Toby was also neutered and given the injections he needed.

“I can’t say enough about how wonderful and supportive the branch was,” says Dawn. “People talk about going the extra mile…Margaret went 20 miles extra to help this cat.”

Dawn would have loved to have kept Toby but the tabby was terrified of her friendly dogs so she made the tough decision to place him into CP’s care.

While Toby was well looked after in CP’s care, it took him a while to be rehomed. Potential adopters, it seemed, couldn’t see past his ragged ear and limp.

Then Joan Hillman arrived to see the cats as she was looking for a new pet. She wanted a cat that had experienced a rough past – one to which she could offer a bright new future.

While the other felines Joan saw were friendly and affectionate, Toby sat in his pen staring straight ahead, like a statue, which made her notice him. She went back to take another look, and made up her mind to take him.

Joan adopted Toby in November 2012, and he is well and truly settled in his new Cornish home.

“He is so affectionate,” says Joan. “He follows me everywhere and knows when I’ve moved. He won’t go outside without me! The whole family loves him.”

Dawn, who originally found Toby in her garden, says: “All he wanted was someone to love him. He has that person now."
Posted by Meow Blog at 10:56 17 comments:

Many of you were moved by ﻿﻿﻿﻿the plight of Scrappy, Dusty and Rusty – three tiny kittens found at a landfill site last November.

Our Ipswich Branch took in the five-week-old kittens after they were spotted and saved by site workers.

﻿﻿﻿The kittens bounced back from their ordeal thanks to the branch, and we’re pleased to tell you that all three found happy new homes in December.
Caroline Kennedy rehomed brothers Scrappy (black/white) and Rusty (ginger/white) and has renamed them Chaos and Smudge.

She says: “A friend of mine works for CP and told me about the kittens. As soon as I heard about them I knew I had to do something!”

Caroline first planned to rehome one kitten, but on meeting the pair agreed to take both!

She adds: “Considering what they’d been through they were behaving normally, they were typical kittens, into everything!

Chaos and Smudge have settled in well and are keeping their new owners entertained.

“Chaos is into everything, he’s completely mad,” says Caroline. “Smudge is the more laid-back of the pair. They both get on well with our rescued Rag Doll cat Daisy, who’s an old girl and mothers them.

“They’re both lap cats – Chaos is my lap cat and Smudge is my husband’s. The kittens’ favourite game is running up my legs!”

Debbie Clark homed tortoiseshell Dusty and has renamed her Kassie. Debbie's husband spotted the kittens' story on the BBC website and the pair decided to rehome her as she reminded them of their previous cat.

Kassie moved into her new home with Debbie, her husband and eight-year-old son just before Christmas.

"She's been brilliant," says Debbie. "We thought she'd be a quiet cat but as soon as we got her home she was nibbling around my husband's feet and playing with the coffee table legs!

"There's something funny she does which makes my son laugh. She lays sleeping, stretched out, under the bed runner and you wouldn't know she was there."

It looks like all three landfill cats got very lucky with their new owners. To support CP's work with abandoned and unwanted cats, just click here.