Vote now for the winner of the PURINA® Better Together category 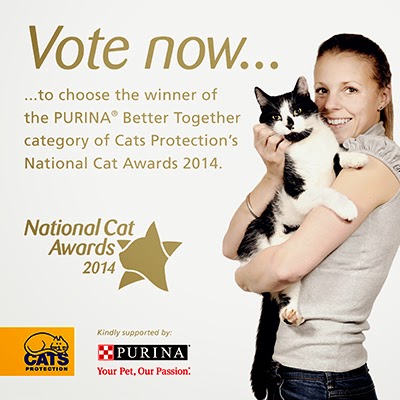 We’re very pleased to announce that the five finalists for the PURINA® Better Together category in our National Cat Awards have been selected by our Purina and Cats Protection judging panel. This category celebrates the special bond that has transformed and enriched the lives of both a feline and human – it’s all about recognising the strength of the relationship between the cat and their owner along with the positive things they have done for each other.

Now we need your help!

Please go to our Facebook page and ‘like’ the photo of the cat that you think deserves to win this award. You can read a bit about each cat and its story in the description underneath the photo. Just click on the images and scroll through to see all five finalists.

The closing date for voting is 4pm on Weds 9 July at which time we’ll remove the photo album and count the votes. The winner will be revealed at the National Cat Awards ceremony on 7 August. Of course, we’ll let you know who’s won on our Facebook page and here too!

Find out more about the National Cat Awards 2014 at www.cats.org.uk/national-cat-awards

Behind the scenes - our Support Adoption For Pets video shoot

As I cruised along the country roads of Surrey towards Cat Protection’s Haselmere Adoption Centre on Wednesday 11 June, the warm sun was streaming through the trees and I knew we were going to have a great shoot.

I have been volunteering in the media office at the National Cat Centre for a month or so now and when the competition came up, I was suggested for the video as I have been producing videos for a few years.

We needed a quick turnaround to get the video completed, as the sooner it was uploaded to Facebook, the sooner people could start voting. After a fair few emails and phone calls the script was finalised the Friday before the shoot and we were ready to go.

Cats Protection decided to film the video at the Haslemere Adoption Centre in Surrey, where they desperately need to build new isolation pens. I wanted to feature as many of the staff and volunteers talking on camera as possible, but having spoken to Suzie Prigmore, Manager at Haselmere Adoption Centre, I knew she was nervous about this. I didn’t know how many of the other staff would be willing to speak on camera until I arrived at the centre on the day of the shoot, which concerned me a little as I like to be fully prepared when filming.

When I first arrived, I got everyone together to discuss what I had planned to film that day. Suzie, Joe and Terry agreed to speak on camera and I sent them off to learn their lines while we began filming the sequence with featured cat Rouix.

I was very lucky to have got my good friend Matt to operate the camera for me on this project, while I directed the action. 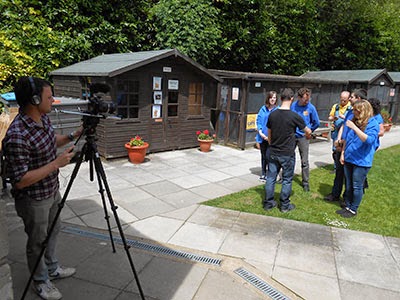 People say you should never work with kids or animals. I soon found out why…

The first scene we filmed was with Rouix, on the table in a treatment room. Although he was perfectly happy, Rouix was a bit camera shy and wasn’t able to stay on the table for very long at all. I was quite worried about this as the opening sequence to any video is the most important and has to grasp the viewer’s attention quite quickly. Staff member Anna who is holding Rouix in the video was very good with him though. When she started grooming him, he did settle down a bit and we finally managed to get some good shots. In the end we filmed him constantly for about 15 minutes but only got him to look at the camera for a few seconds!

Despite a tricky start, the rest of the filming went really well and the whole day was really enjoyable for everyone involved. 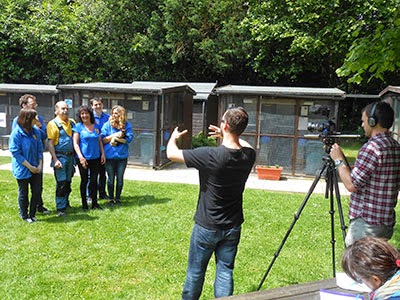 For me there were several highlights. The first was when we came to film the group shot, featured at the end of the video. The initial part of this involved Suzie speaking her line, before zooming out and filming the whole team shouting ”Please help the cats at Haslemere Adoption Centre!”. Everyone seemed really buzzed up and happy, so it was a pleasure to work alongside such enthusiastic and positive people. I think their personalities and dedication to their job really comes across in the video.

Suzie’s line was long and tricky for her to remember, so we started off by splitting it in two. I read the line out loud and she repeated it on camera.

I knew that when it came to editing the video it would be hard to bridge these two lines together due to the background noise, so rather cheekily I pushed Suzie to say the line all in one go. She had obviously warmed up and started to get her confidence because after only a few takes she managed it. I was so happy for her I punched the air, ran up to her and gave her a big hug. I think she was pleased with herself, but also quite relieved!

The next highlight features staff member Terry (or ‘One Take Terry’ as he became known), as most of his parts were completed in just one take! Just by reading through his lines a couple of times he was able to speak them to camera without any problem at all. He was such a professional and it made my job so much easier on the day.

When filming the scene where Terry makes the appeal for the grant, the cat next to him jumped up to look at him! I couldn’t have made that happen if I wanted to, it was just luck on the day. (Check out the scene at 1:50 in the video) Terry has such a strong voice for filming and I would have liked to have featured him more in the video, but I was concerned his superb moustache was going to take attention away from the cats!

The final highlight was the cats. We managed to get some fantastic shots of them and my favourite was the shot of the three kittens, Desmond, Daphne and Dougall. Daphne even gave us a very cute mew, which I edited in right at the end of the video. 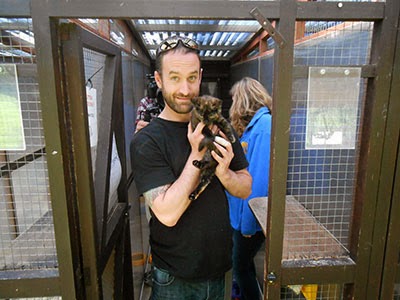 Making this video has been one of the most enjoyable projects I have worked on. The staff at Haselmere were absolutely fantastic, allowing Matt and I to come into their centre for the day and poke cameras in their faces. They gave us everything we needed to make the filming go smoothly, even topping us up with ice lollies and sandwiches!

I sincerely hope Cats Protection Haselmere Adoption Centre is awarded a £50,000 grant. The centre is in desperate need of a refurbishment and the staff there work so hard to support unfortunate cats with limited resources.

To view and vote for our video you need a Facebook account and you also need to ‘Like’ the Support Adoption For Pets Facebook page. You can then vote for the video by clicking the vote button at the top left hand side of the video.

Email ThisBlogThis!Share to TwitterShare to FacebookShare to Pinterest
Labels: fundraising

A family in North Birmingham was recently surprised to find a cat and her newly born kittens under decking in their garden.

Julie and Stephen from the Yardley Wood area of Birmingham found the young tortie and her kittens after their pet dog kept whining and crying at a particular spot in their garden.

The couple initially thought they had mice but eventually their son heard the little kittens crying and then mum started to pop her head out. It seems that the cat may have been abandoned by people in the neighbourhood, so heavily pregnant the cat sought a quiet and dry place to give birth, and found safety under the decking.

Julie and Stephen set up a trap with an old dog crate on the decking with a piece of string attached to the door with food inside. Eventually the queen and the two kittens, ventured inside the crate and Stephen pulled the string to close the door. The crate of cat and kittens was put into a spare, quiet room but with two dogs it was not an ideal situation. 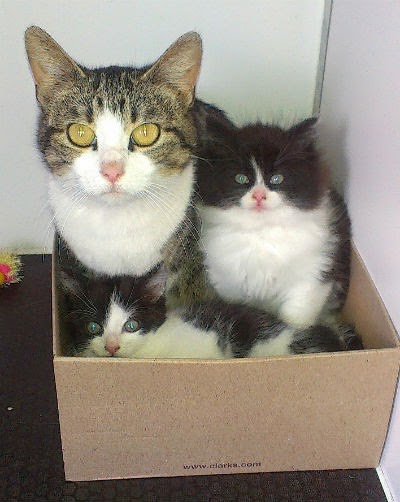 When space became available, Jane, a Fosterer from South Birmingham Cats Protection, collected the mum and kittens and placed them in a foster pen at her home. She named the queen Fay and her two kittens are Wilbur and Wilfred.

Jane says “As with many cats and kittens that come into our care because of an emergency situation, it has taken them a while to settle and to build up their trust in humans again. Plenty of time and patience is needed along with lots of toys! 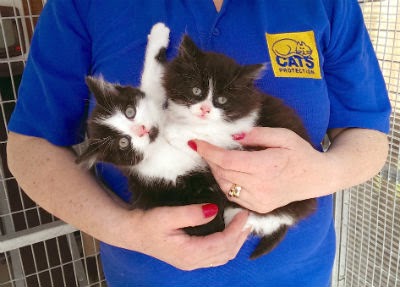 “All three have been rehomed together by a lovely couple in Olton, who recently lost their two elderly cats and have an empty home now without them. I am sure that these three will keep them very busy.”

Cats Protection recommends that cats are neutered at four months of age or younger, before they start puberty, to prevent unplanned pregnancies. Find out more about pregnant cats, the birth and care of young kittens in our Essential guide: http://www.cats.org.uk/uploads/documents/cat-care-leaflets-2013/EG18_Pregnant_cats,_birth_and_care_of_young_kittens.pdf
Posted by Meow Blog at 09:00 1 comment: