A new home for the shoebox kittens

In March, we lost our beloved cat Cleo, who I had loved and looked after for 20 years. To say we were shattered is an understatement and she left a huge hole in our lives. We knew we had so much love to give, but didn't want to rush in and feel like we were ‘replacing’ her.

After six months, we made contact with Croydon Cats Protection, who suggested we visited one of their wonderful fosterers. On visiting, we saw Epic and Spirit (then called Abbie and Andy). They were brother and sister, only four weeks old and had been found abandoned in a tiny shoebox. 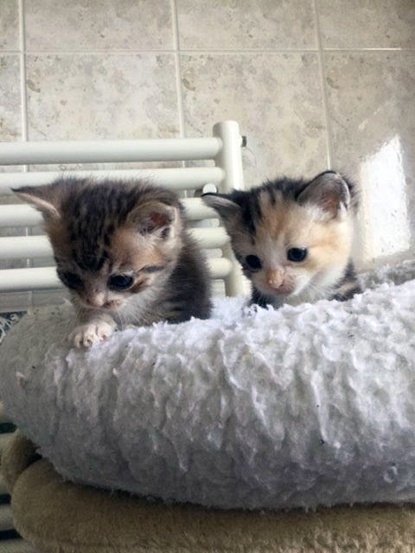 We instantly fell in love with them and both burst into tears. Although small and helpless, they were also feisty and playful, and so full of character that we couldn't drag ourselves away. We knew that we were meant to be a family!

When they were old enough to leave the fosterer’s excellent care, they were brought round and they stepped nervously from their carry box to tentatively explore their new room, under the watchful eye of the foster mum and two very excited fathers. We adopted them to coincide with Alex’s half term, and every day I would come home and find them fast asleep, curled up together on his chest or lap, while he tried to read, mark, or watch TV around them! 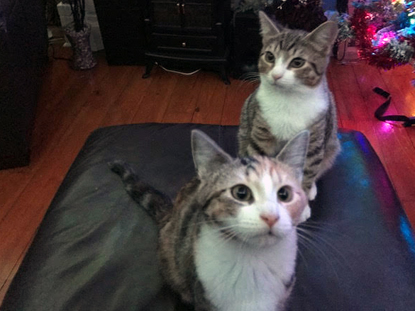 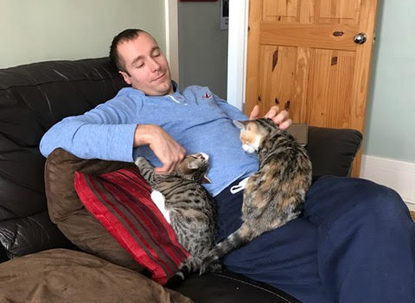 Straight away we formed a connection as a family and they are the most playful and loving cats we have ever known. You only have to sit down to have one come scuttling up the stairs to plonk down in your lap. They are also the most mischievous animals you could imagine: if we turn on the shower or start brushing our teeth, they will both instantly come and ‘help’ us, normally by sitting in the sink! They are the best of friends and the only time they are not snuggling down with us is when they are asleep, completely entwined in each other, in some corner of the house!

Although we started the year with such sadness, the year ends with such happiness and joy from these two and we are just so grateful that we have little Epic and Spirit in our lives.