A speedy recovery for Bolt

This post has been written with the help of Cats Protection's Aberystwyth & District Branch.

Bolt first arrived at the Aberystwyth & District Branch of Cats Protection in June after being found as a stray. Although he was being regularly fed by a local resident, he appeared sodden from rain and bedraggled. With a floppy left ear and a few scars, it was apparent he had been in a few fights. 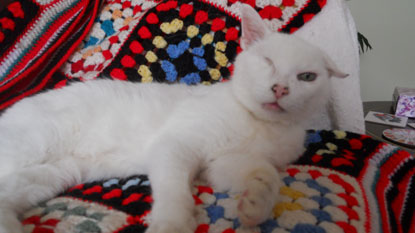 When Bolt arrived at the branch, it was soon clear that he was a lover of food. Whatever he was given, he wolfed it down and looked for more – the branch even considered naming him Oliver! This was thought to be a practice he’d picked up from being a stray and not knowing where his next meal would come from.

Bolt also had a huge swelling on his face. The bulging mass was so huge, it caused his right eye to remain closed and was a serious concern. On visiting the vet, he was sadly diagnosed with cancer and it was advised that the affected area should be cut away.

Struggling to come up with a name quickly, one of the branch’s volunteers came up with the name ‘Bolt’ – perfect for a cat that is quick on his paws. The vet also suspected that Bolt had, at some point, been run over, as his hind legs were stiff and fairly unstable. It was found that he was also suffering from arthritis, again as a result of his time on the streets. 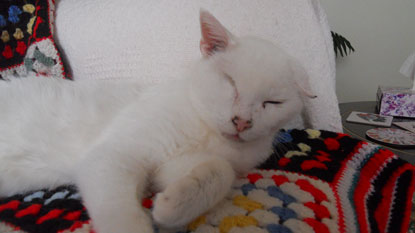 Slowly recovering from his operation, Bolt became more confident and affectionate. While he was in the branch’s care, he stole the hearts of both the volunteers and staff working there and was known to regularly sit on laps while being stroked, purring and dribbling.

He was eventually homed and has quickly settled into his new home. He particularly enjoys his owner’s company and still has a huge appetite!
Posted by Meow Blog at 08:00