"Why is my cat bringing in mice?" and other behaviour FAQs

Note: If your cat starts to display any behaviours that are unusual or they develop a change in personality or demeanour, the first person to speak to must always be your vet. Many changes in behaviour are due to illness or pain and so you should arrange an appointment with your vet as soon as possible.
Other seemingly ‘odd’ behaviours that do not have roots in a medical condition can be explained by understanding the natural behaviour that makes a cat a cat. For these types of behaviour issues we would recommend a referral to a qualified behaviourist from the Association of Pet Behaviour Counsellors (APBC).

Here are just some of the questions from our Q&A:

Question: We rescued two gorgeous girls a few weeks ago and I've noticed one of them is eating all the jelly from both dishes before the other gets a look in. I've tried calling both girls to eat at the same time but if the quieter of the two doesn't come she's missing out on the good stuff. Putting it out at separate times doesn't work either. Any ideas?

Answer: Lots of people have this problem. It would be worth separating them during feeding times. Watch your cats closely to work out which areas of the house they prefer to spend time in. If your quieter cat prefers to be in the bedroom, then I'd suggest feeding her there and the more confident one downstairs with the door shut between them. You can also get microchip cat feeders that read the cat's unique microchip number and will only 'open sesame' for the right cat! 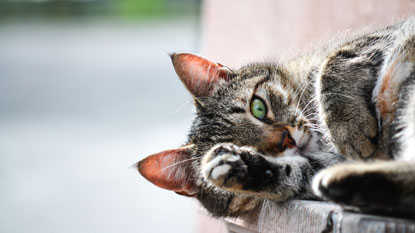 Question: My cat has brought three mice into the house for the third day in a row. The first two in my daughter’s bedroom where she likes to sleep with them at night and then the third this morning she was just bringing in. Are these gifts and is there any way we can stop this?

Answer: While previously it was thought that cats brought prey back to the house as a gift, the current thinking is that cats often prefer to bring prey back to their core territory, which is generally the house. This is a natural instinct in all cats (even if some don't actually hunt, they have the ability to), so it would be impossible to stop. However, you can reduce the amount a cat hunts by keeping the cat indoors during dawn and dusk when its prey is most active, placing a quick release collar with a bell on it around the cat’s neck and most importantly, giving the cat a suitable alternative outlet for hunting behaviour such as interactive play sessions with fishing rod toys (ones with feathers at the end are very popular). Always store the fishing rod toy out of the cat's reach after play is over for health and safety reasons. 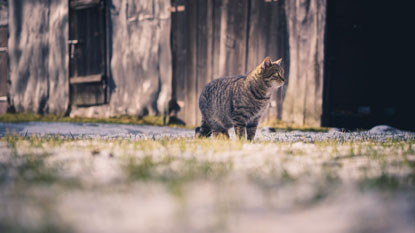 Question: Why does my cat claw me in the mouth every morning while I'm sleeping?

Answer: I know of several cats that try the exact same tactic! It's to wake you up either for attention, food, play, or perhaps outdoor access. The first thing is to figure out what the cat wants and then try to give the cat what it needs without having to wake you up. For example, if it wants outdoor access to go to the toilet, provide the cat with a litter tray at all times. If it's for food, gradually introduce your cat to feeding enrichment such as putting biscuits into a cardboard egg box and showing them (during the day) how to use it. Once the cat has the hang of it, you can then leave an egg box with a small portion of dry food from their daily allowance out just before bed.

Question: When are rescue cats meant to go outside? I was told two to three weeks and someone else said six weeks. When I hold her by the backdoor or at the window she looks terrified of the outdoors so I don’t mind her just staying in if she wants. We’ve had her two weeks, so she likes her corners.

Answer: Letting cats out for the first time can be stressful. This booklet has some information that should be helpful: http://www.cats.org.uk//cat-care/EG02_Welcome_home.pdf

Email ThisBlogThis!Share to TwitterShare to FacebookShare to Pinterest
Labels: behaviour