What do cats see when they watch TV?

If you’ve ever noticed your moggy staring at the television, seemingly captivated by what’s on the screen, you may have wondered what it is they actually see. While some cats are not bothered by the small screen, others will watch intently, particularly programmes featuring other animals.

Some studies have indicated that cats are able to identify imagery on TV, as we know that they can distinguish between outlines, patterns and textures. However, we do not know with certainty what they perceive the images to be. Cats rely much more on other senses, such as hearing and smell, to understand the world around them, so for some cats it may just be the noises they hear and fast movements that see that attract their attention towards the screen. 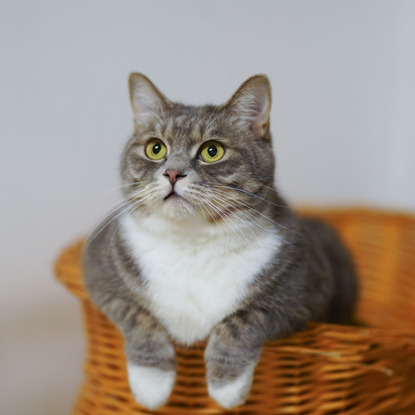 Cats that are more active hunters may show more interest in the TV than others. If they appear to be watching the action and have their eyes open with narrow pupils and their ears and whiskers pointed forward, they could be stimulated by what's coming from the TV. However, if they are watching with dilated pupils and flatter ears, this could indicate that they are more concerned and stressed by what is on the screen, and so should be given the opportunity to run away if needed.

Why are some cats particularly interested in big cats on TV?

All of the different species of the cat family that are around today have evolved from one common ancestor, and although our domestic moggies split from their lion and tiger cousins a long time ago they may still be able to recognise their feline outline or facial features on screen. However, even if they can identify other cats on television, the majority of cats are unlikely to feel threatened by them as they would a neighbour’s cat, because they cannot detect their scent or other cues that tell them it is a real cat. It could also be that owners are more likely to pick up on their cats watching other cats on television because of their own associations when actually their cat watches TV at other times too.

To find out more about cat behaviour, visit the Cats Protection website.
Posted by Meow Blog at 08:00