A newborn kitten has been saved from being caught up in a lawnmower by her heroic rescuer, who then bottle-fed her through the night.

Darryl Messer, 25, was cutting the lawn at his home in Whitehaven, Cumbria when he spotted something furry in the longer grass. On closer inspection he was shocked to discover it was a tiny ginger kitten. 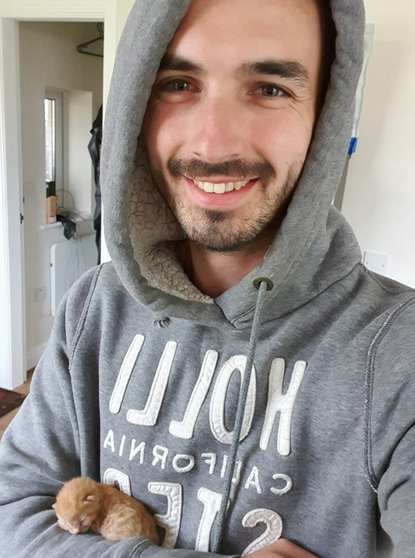 “At first I thought it was a something like a dead weasel but I soon realised it was a kitten that was still alive,” said Darryl.

The PhD student scooped up the feline, who he named Virgil, after defender Van Dijk of his beloved Liverpool FC, and wrapped her up to keep warm.

“She was cold and wet and had a few slugs on her and she was still attached to the umbilical cord,” added Darryl. He quickly sought advice from a local vet.

“The vet showed me how to bottle feed her and make sure her bowels were working. She did warn me it was unlikely she would make it through the night,” said Darryl.

He decided he wouldn’t go to bed that night, bottle feeding Virgil every two hours and making a cosy bed to keep the tiny kitten warm. His sleepless night paid off and the kitten survived. 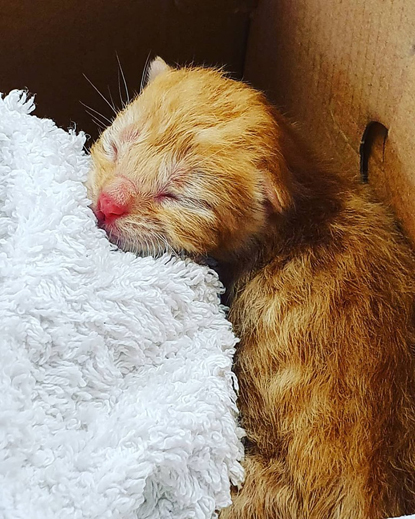 Darryl originally thought the kitten was a boy, having been wrongly told all gingers were male. Despite discovering he was in fact a she, he wanted the name Virgil to remain.

“As lovely as Virgil was, I quickly came to realise that I was not going to be able to hand-feed her for the next four or five weeks!”

It was then that Jade Courty, a veterinary nurse and a volunteer fosterer for the West Cumbria Branch of Cats Protection stepped in. Jade has taken on the responsibility of hand-rearing Virgil, who she has nicknamed April.

Virgil’s mother has since been found, having taken refuge on the roof of a neighbour’s one-story extension. It is unclear whether she dropped her kitten when moving her litter or she fell from the roof. She is being regularly checked on by neighbours.

Jade certainly has her hands full as she is also fostering Cleo and her litter of kittens, who were born on the same day as the lawnmower drama.

Darryl added: “I’m seriously thinking about adopting Virgil when she is ready to be rehomed but I will have to think about the commitment involved.”