How are domestic cats related to big cats?

All cats, from our own pet moggies to lions and tigers, belong to the same family of animals; the Felidae family.

These animals first began to evolve 25 million years ago and have become the most highly-developed carnivorous hunters of all the mammals.

The oldest cat lineage is the Panthera, which split from its common ancestor 10.8 million years ago. This is the line our modern day big cats, such as tigers (Panthera tigris), panthers (Panthera pardus) and lions (Panthera leo), have evolved from. As the tiger was one of the first to evolve they have spread out and adapted to the most environments around the world, from the -40°C nights of Siberia to the +40°C swamps of the Sundarbans.

The Felidae family continued to evolve and branch off into different common ancestors until 3.4 million years ago when the Felis genus appeared. This group includes the wildcat (Felis silvestis), the jungle cat (Felis chaus) and our own domestic cats (Felis catus).

Our moggies are most closely related to Felis silvestris lybica, also known as the African wildcat. As they separated into different species not that long ago, their genetic makeup is almost identical and they share some of the same behaviours, such as hunting and the need to be alone. Our cats are also closely related to the Scottish wildcat (Felis silvestris grampia) which is why they can interbreed and produce fertile offspring.

While our domestic cats and tigers shared a common ancestor around 10.8 million years ago they in fact share 95.6% of their DNA! However, that is not where the similarities end.

5 similarities between cats and tigers


1. They have a similar body shape 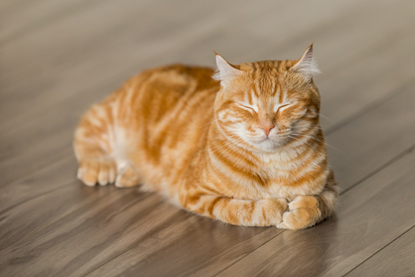 While there are vast differences in size within the Felidae family, with tigers weighing up to 300kg and our largest domestic cat breed the Main Coon weighing up to 8kg, there are common themes to their body shape. These include strong supple bodies, a long tail for balance, fine heads with sharp teeth and retractable claws perfectly adapted for hunting their prey.

2. They are obligate carnivores 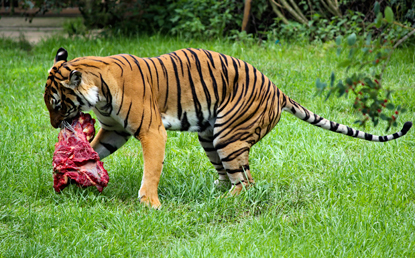 As they are highly adapted to hunt it is no surprise that, like the tiger, our domestic cats are obligate carnivores, which means they need to have meat in their diet. This is because without meat they can become deficient in certain nutrients, such as taurine, arginine, arachidonic acid and retinoic acid, which can cause a range of health issues. While tigers have to hunt for their food, our cats have the luxury of commercial well-balanced complete cat foods to meet all of their needs. Despite this our moggies still have a strong hunting instinct.

3. They scent mark their territory 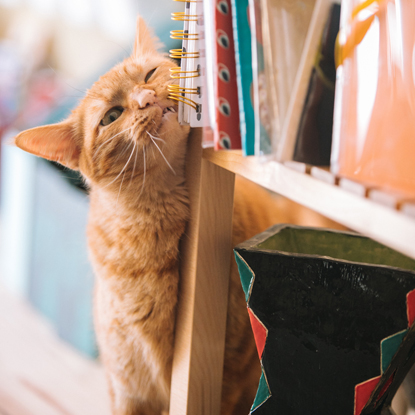 Territory and personal space is very important to both tigers and domestic cats. They will mark their territory by spraying, rubbing their facial scent markers on objects and scratching around the area to warn off other cats. For help on how to stop your cat scratching in the home, visit www.cats.org.uk/scratching

4. They prefer to live on their own 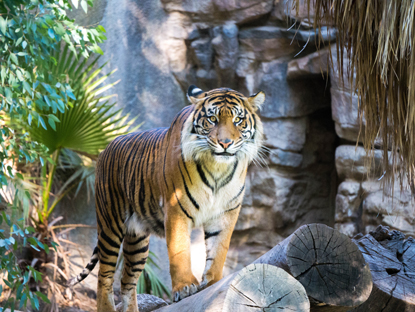 The only members of the Felidae family that frequently establishes social groups of ‘families’ are lions. Other felines usually prefer to live alone, typically only coming together to mate. This is because they are highly territorial. As a result of being solitary, they have fewer refined facial muscles for communication, compared to social species like dogs. 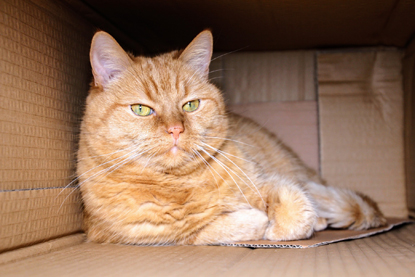 With many zoos becoming more focused on improving animal welfare, the use of enrichment has become a normal part of the animals’ daily routine. This has shown us how, just like our domestic cats, tigers love a good box too! It’s important to provide your cat with plenty of enrichment at home, to make sure they don’t get bored. Watch our video for ideas

For more information about the history of cats, take a look at our blog.
Posted by Meow Blog at 08:00